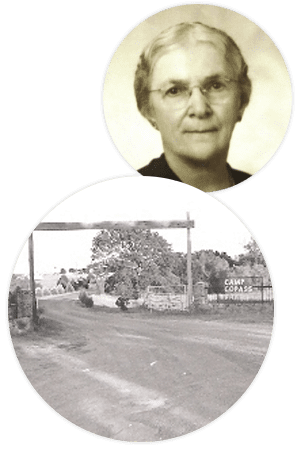 Camp Copass began in 1946 when Lady Crickett Keys Copass started a girl’s camp on the peninsula. Churches began having summer youth camps and called it Camp Copass after Lady Crickett.

Today, over 70 years later, we have a 50 unit Retreat Center (hotel) facility, a 32 unit Conference Center (motel) facility, and 12 dorms including five with kitchen units. Our dormitory (cabin) capacity is over six hundred and fifty. We also have space for eight RV hook ups.

In 1997 an outdoor Recreation Pavilion was built. This is a 12,000 square foot covered facility with two basketball courts that can be used for other activities as well. An eighteen hole miniature golf course was added in 2004. In the early 1970’s the camp built a dining hall to accommodate their growing needs which could seat three hundred and fifty people. Our new dining hall is an expansion and remodel of that and now has capacity for over six hundred. The dorms of Faith, Peace, Happiness, and Amazing Grace have been remodeled and new dorms have been built. In 2011 the Tally Retreat Center was completed, the roads were paved and Angel Conference Center was remodeled. In 2013, a new Sand Volleyball Court and the ever popular GaGa Pits were built! 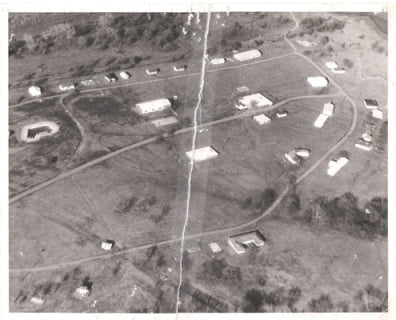 For a couple of years the camp was known as North Texas Baptist Conference Center. The name was confusing and did not catch on so in 2005 it changed back to Camp Copass. We serve four Southern Baptist Associations: Cooke, Denton, Harvest, and Palo-Pinto. The Board of Directors is elected by each Association.

Weekend and week long retreats and conferences are held year-round by many denominations and various secular groups. In the summer there are ten weeks of camp, some of which bring over eight hundred people that are ready to hear the Good News about Jesus!

God has truly blessed Camp Copass and it is our desire to bless each person that we have the opportunity to serve.

Camp Copass offers an emergency communication text group. This is to help campers and counselors get critical and up to the minute urgent information about the weather or any threats to security and safety. Participation is optional but recommended during your stay on camp grounds.

True worship. Watching kids not be ashamed and lifting their hands to God.
-Garon, Ridgecrest BC
Share Your Story

You can make an online donation to Camp Copass using any major credit card. Your donations are greatly appreciated.

Our campers look forward to returning every summer....lots of fun activities with emphasis on growing in their relationships with the LORD!! Thanks Camp Copass for being so organized and ready to serve the Lord making it an amazing time for our kiddos!!
-Maggie P., Community Church
Share Your Story